With a Passion that Inspires and the Leadership that Transcends, CETYS University celebrates its 60th Anniversary of dedication to the youth of Mexico and the Cali Baja region through quality education. The celebrations were held from September 17 to 23 and included international keynote speakers, environmental activists, the unveiling of infrastructure, and cultural events, all in a hybrid modality.

Campus Mexicali began its celebration activities on Friday, September 17, with the reopening of the Jesús Rodríguez Montes Auditorium, a renovated venue initially built-in 1974 that has been a fundamental part of the education of thousands of graduates.

“Over time, CETYS presidents have given continuity to significant actions and strategies that have favored the institution. We are moving to a stage of renewal and transformation, where education is facing universities without students, exchanges without mobility, and the need to include relevant actors in higher education. We move forward through this stage being more assertive, understanding that present difficulties will not necessarily be solved with backward thinking.”

“60 years represent a lifetime of challenges, of goals, of stories. The achievements are innumerable, having more than 45 thousand graduates with a presence in 26 countries, achieving unquestionable national recognition, and having a growing global presence. Becoming a stronghold of the Baja California community that is positioned as a leader in education, being an institution that contributes to making this cross-border region uniquely competitive and attractive for investment.”

Following the opening ceremony, Mariano Jabonero, Secretary of the Organization of Ibero-American States for Education, Science and Culture, presented the lecture “Education After the Pandemic: Inertia or Transformation” and highlighted that, despite the invaluable losses derived from the pandemic, considered like the fifth wave of globalization of Ibero-American education, research and innovation have triumphed over adversity, demonstrating that they constitute, together, the higher bet to overcome the crisis.

Likewise, CETYS President signed a Collaboration Agreement with the Organization of Ibero-American States for Education, Science, and Culture (OEI). One of the first activities to be promoted is the possible establishment of the OEI Chair at CETYS University. And later, to promote student and faculty mobility, alliances with Latin American countries, research, as well as promote the PIMSA-CETYS Distinguished Chair Program to bring talent from institutions belonging to OEI.

In a subsequent event, employees who have been part of the CETYS Family through 5, 10, 15, 20, 25, and 35 years of uninterrupted service were recognized, highlighting their dedication and commitment throughout the health contingency imposed by COVID 19. 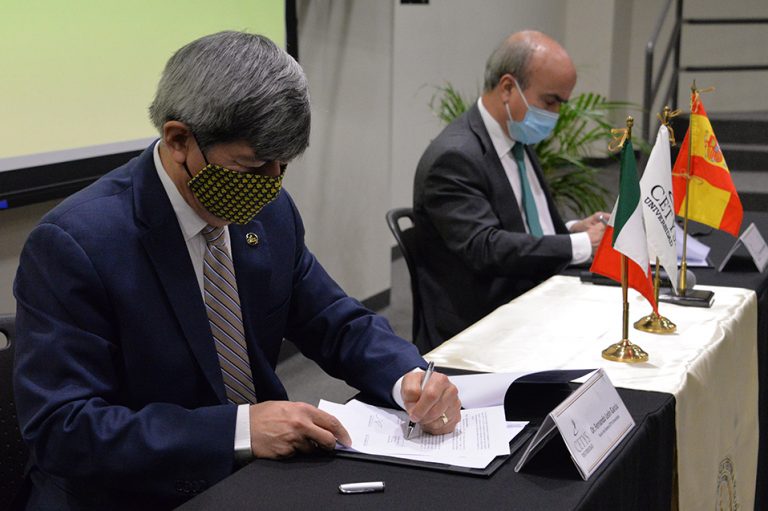 The REDES International Conversatiey of Student Leadership panel began on September 21, with an inaugural conference by Anuna De Wever, an environmental activist, who invited all young people to participate through activism in various causes. De Wever encouraged CETYS students to fight for Human Rights, take conscience and care of the environment, and use virtuality to create international collaboration networks.

During the international panel: “Avenues to create relevant universities in the post-pandemic” offered in hybrid mode by CETYS University, within the framework of its 60th Anniversary, Dr. Fernando Galván-Reula, President Emeritus of the University of Alcalá, Spain; Dr. Shawn Chen, Chairman of SIAS University in China; and Dr. Fernando León-García, President of CETYS, discussed the challenges they faced in their different contexts and the dynamics that are important to consider in the pandemic and post-pandemic world of Higher Education Institutions.

At the Tijuana Campus, the “Multilevel Parking Structure and Pedestrian Skyway” was inaugurated as part of the Infrastructure Master Plan for the Campus of the Future (2036). The facility has seven levels, a capacity for 700 vehicles, and a total of 7 thousand 895 square meters that connect through a pedestrian bridge with the rest of the campus. All this with an investment of more than 200 million pesos.

At the Ensenada Campus, on September 22, Dr. Carl Jubran, President of The American College of the Mediterranean, delivered a lecture: “Internationalizing the college curriculum: the global campus at home.” He spoke about internationalization, from a holistic perspective, in the study programs of Higher Education Institutions. He also talked about the actors within universities that promote and allow the development of international experiences; and the current challenges in the face of COVID contingency.

Finally, on Thursday, September 23, professor Bardo Limón-Félix was recognized as the winner of the contest to develop the lyrics for the CETYS University anthem. His name, creativity, and talent will be part of the history of this institution. Professor Limon-Félix is an Alumni and currently serves as the Coordinator of the Bachelor of Marketing Administration program of the College of Business and Administration at the Mexicali Campus. Professor Limón-Félix highlighted the relevance of CETYS University and its impact on the region throughout its 60 years of existence.

With a vision set for the future, CETYS University continues and expands its educational impact on a national and global level, with the new challenges that frame higher education, moving to a stage where virtuality and technology will form a core part of its mission.